A More Perfect Union: for all People

On this day, two hundred thirty six years ago, America declared its independence and eventually its quest to form a more perfect union.  A union in which each citizen is endowed with certain inalienable rights, of which are life, liberty, and the pursuit of happiness.

Each year, Americans gather not just to celebrate the anniversary of their nation’s independence, but to also celebrate the ideals that they profess to uphold.  To celebrate liberty, freedom, and the quest to perfect their union.

In 2012, this quest continues.  It has been a quest that has had its ups and downs.  A quest that has experienced true challenges: slavery, civil war, segregation, systemic racism, a great depression, wars, economic crises.  Yet America continues to move forward.  It has grown stronger through these challenges and has taken the opportunity to grow into a more perfect union over time, as shown by the 13th Amendment, the Civil Rights Bill, Brown v. Board of Education, the establishment of various institutions to protect the shortcomings of its economic system as proven vulnerable during the Great Depression, and more.  Today, the quest no doubt continues.

This quest, in fact, is not unique to America.  The quest to perfect a union of people based on a set of inalienable rights is common to peoples and nations all around the world, and is being pursued in varying stages.

In Europe, questions of identity and purpose are at the core of its economic crisis that has brought it to a juncture that challenges the strength and solidarity of a unified Europe.  In China, rising incomes and increased global influence are moving it closer to a stage at which it will have no choice but to grant its people an expanded set of civil liberties including freedom of speech.  In many African countries, high rates of economic growth will require significant political and institutional changes to translate high rates of GDP growth into real development and wide spread opportunity for their peoples. 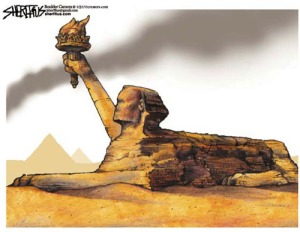 In Syria, we are witnessing a violent struggle by a people trying to claim their right to begin such a quest.  In Egypt, we see a people passionately and fervently trying to secure ownership of this quest in order to secure the set of inalienable rights that their revolution is also based on.

Today, America celebrates its 236th birthday.  It celebrates its history that includes challenges that have threatened the existence of its union and the ideals of which the union is based.  As we look at societies around the world, at mature democracies like in Europe or at young unions in formation like in Egypt, we see how common this quest really is.

America is not perfect, but it is a powerful example through its own formation and quest to be more perfect over time.  Young democracies around the world should always remember that challenges in the formation of a country are inevitable, and that these challenges can be so great as to threaten the inalienable rights that are common to all peoples.

With a foundation in the virtues of a free and just society, the quest for a more perfect union is for all people around the world, and is the true source of progress and development.

These truths are self-evident.