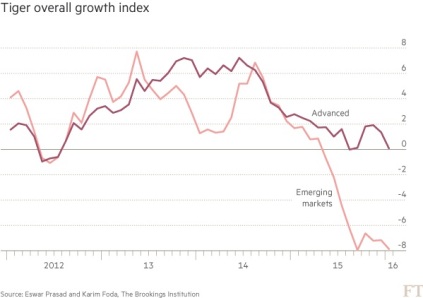 The latest Brookings-Financial Times TIGER (Tracking Indices for the Global Economic Recovery)
Index reveals global economic recovery remains weak, uneven, and in danger of stalling yet again. The world economy continues to be beset by
mediocre growth, hesitant or impotent policy actions by national governments, and a dearth of confidence among households and businesses.

Analysis by Eswar Prasad and myself can be read at the Financial Times or at Brookings.

The April 2016 update to TIGER can be viewed interactively at Brookings.

Here are some highlights:

Eswar Prasad and myself update TIGER twice a year, around the times of the IMF-World Bank Meetings of finance ministers, central bank governors, economists and policymakers. TIGER is a set of indices that track the speed of economic activity across the world’s major emerging markets and advanced economies using macroeconomic, financial and confidence indicators.

The April 2016 update to TIGER can be viewed interactively at Brookings.