With the Russian currency (the ruble) plummeting and borrowing costs shooting higher, Russia is on the edge of a full-blown financial crisis.  In the last three months, the ruble has lost nearly 50 percent of its value against the dollar, as the price of Brent crude oil (a key oil price benchmark) has dropped about 45 percent.  The Russian economy has grown increasingly dependent on revenue from oil and natural gas extraction.  It is estimated that the government budget requires an oil price around $100 per barrel to balance.  Oil is currently trading at around $60 per barrel.  The central bank forecasts that the country’s GDP will contract by 4.5 percent if oil prices remain at current levels.

Investors are concerned about Russia’s ability to endure a prolonged period of low oil prices and have begun to withdraw capital from that country.  The resulting outflow of capital has depressed the value of the ruble and strained the country’s financial system.  The Russian central bank has attempted to intervene to stem the ruble’s decline by raising interest rates (to attract investors to higher yields) and by buying rubles (by selling its foreign currency reserves) with limited success.

In this post, we explore Russia’s growing dependence on oil and natural gas and the evolving relationship between the price of oil and the value of the ruble.  We also analyze the mechanisms through which a falling ruble could impose financial distress on the Russian economy, particularly the impact on Russian borrowers’ ability to service their debt obligations within the context of the existing U.S. sanctions regime.  Investors would benefit by understanding the underlying factors of the current crisis in Russia.  A financial crisis in that country could quickly spread to other emerging and developed economies, curtailing global economic growth and reducing investor confidence in the emerging economies.

Following a period of substantial growth in crude oil and natural gas production, the Russian economy has become increasingly dependent on oil and natural gas exports.  These exports make up a growing share of Russia’s total exports (approximately 70 percent) and the revenues they bring in comprise an increasing portion of total government revenue (greater than 50 percent).  The Russian government derives this revenue primarily from its ownership stakes in Russian energy giants[1], the state-sponsored banks that fund those energy firms, and mineral extraction taxes. 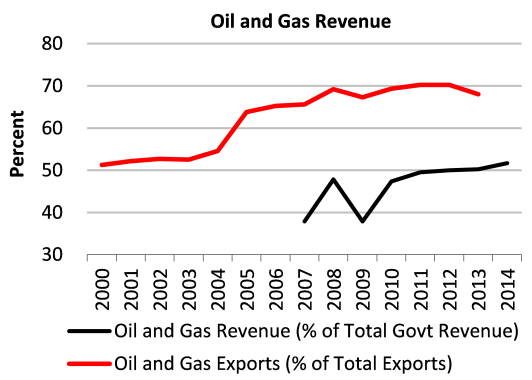 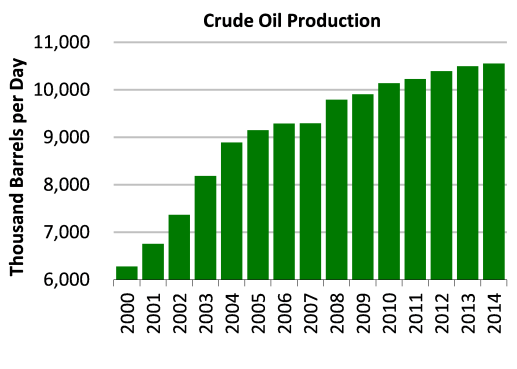 Brent and the Ruble

Russia’s growing dependence on the crude oil and natural gas sectors has produced an important relationship between the price of Brent crude oil and the ruble-dollar exchange rate. 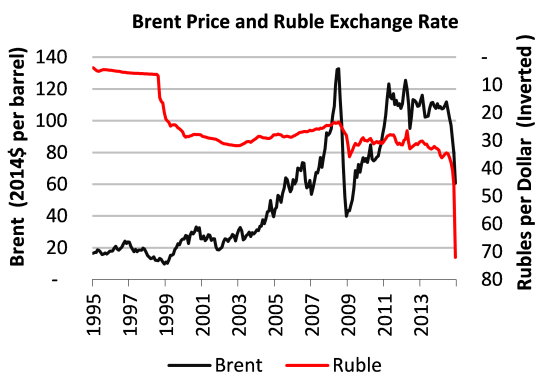 To measure the relationship between the price of oil and the value of the ruble, we calculate the correlation coefficient between changes in the price of Brent and changes in the value of the ruble against the dollar.  The correlation coefficient measures the strength of association between two variables and has a value between -1 and 1[2]. A value of zero suggests no relationship between the two variables.

In the analysis below, we calculate a rolling correlation, which measures the change in the correlation over time as the Russian economy has grown more dependent on revenue from oil and natural gas extraction.  Further, we calculate the correlation over 1-year, 5-year, and 10-year rolling periods in order to measure the relationship between the two variables over short periods of time (1-year) and longer periods (10-year).

The effect of this growing correlation is that the ruble exchange rate has become significantly more sensitive to volatile commodity prices, increasing Russia’s financial and economic vulnerability through the various economic and financial mechanisms into which the exchange rate feeds.  For example, if the ruble depreciates when crude oil prices fall, domestic price inflation would increase due to the higher cost of imported goods and Russian borrowers of dollar-denominated debt may find it difficult to meet their debt service payments (which would increase in ruble terms).  This post primarily focuses on the latter concern.

Over the last several years, low inflation and loose monetary policy have reduced interest rates in the U.S. for most borrowers. Russian (and other emerging market) companies have capitalized on these lower borrowing costs by issuing more dollar-denominated debt.  As shown in Figure 4 below, Russia’s external debt has increased significantly since 2000 to approximately $731 billion[3], of which 74 percent is denominated in a foreign currency, primarily dollars. 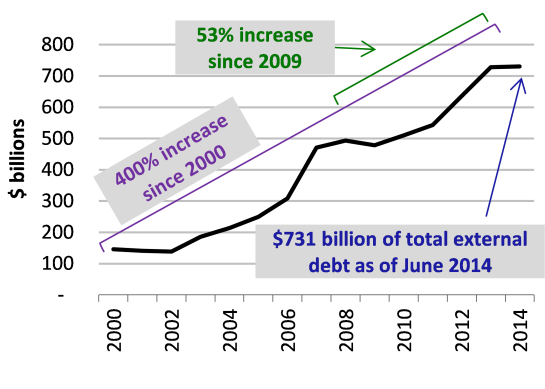 The challenges described above are amplified by the U.S. sanctions regime related to the Ukraine conflict, which has locked Russian companies out of the U.S. capital markets by prohibiting U.S. persons from transacting in certain types of debt with sanctioned Russian entities (this has discouraged international financial institutions from executing financing transactions with most Russian borrowers, whether sanctioned or not).  As a result, Russian borrowers have limited sources of dollar funding with which to refinance the maturing debt.  Their primary remaining source is the foreign currency reserves of the central bank, which are substantial but could quickly be exhausted if the central bank continues to intervene to support the ruble[7] and uses its foreign currency reserves to provide financing support to Russian borrowers of foreign currency debt. 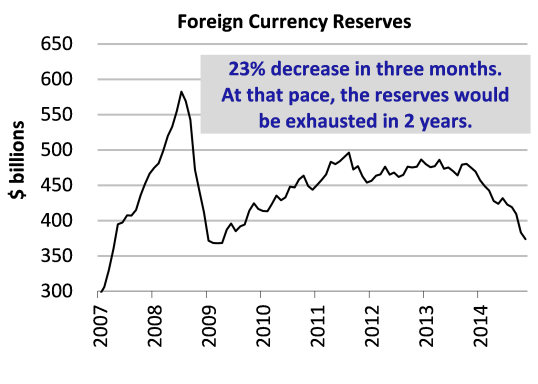 Even if Russian borrowers are able to access dollar funding, the interest rates that investors demand may become prohibitively expensive.  Interest rates on Russia’s dollar debt have already increased significantly over the last year.  Russia is currently rated Baa2, BBB- and BBB by Moody’s, Standard and Poor’s and Fitch Ratings, with a negative outlook from each of the three rating agencies[9].  A sustained period of financial or economics distress (e.g., due to low oil prices) could cause a ratings downgrade.  If Russia’s credit rating is downgraded to speculative grade (the Moody’s and Standard and Poor’s ratings are just one level above speculative grade), the amount of investors who are able to invest in Russia will shrink, interest rates will rise further, the maturity of certain debt obligations may be accelerated and the ruble will depreciate.

The resulting financial distress could significantly curtail economic activity, forcing companies to lay off workers and reduce wages.  With inflation already spiking recently due to the ruble’s decline, Russian citizens may find their living standards reduced.

Russia has few options left to avert a financial and economic crisis.

Mike Azar is a senior associate at Greengate LLC, a project finance advisory firm, and has advised governmental lenders on large energy transactions in Russia.

[4] For example, a company that generates revenues in rubles but pays debt service in dollars could find its debt service payments increased (when converted into ruble terms) when the ruble depreciates against the dollar.

[5] Access to capital markets for certain borrowers may become limited during a crisis, preventing borrowers from refinancing maturing debt obligations at economic rates.

[6] Borrowers commonly refinance debt that comes due rather than simply paying it off with available cash.

[7] The Central Bank sells its dollar holdings in exchange for ruble thereby supporting the value of the ruble.

[8] According to the financial press, liquid reserves make up approximately $202 billion of the $374 billion of the Central Bank’s foreign currency reserves.  The difference primarily comprises $171 billion of funds belonging to the Russian sovereign wealth funds.

[9] The credit rating agencies rate the creditworthiness of borrowers.  Their ratings could impact the interest rate that borrowers are charged on loans and the pool of investors that are able to participate in lending.

[10] The objective of capital controls is to support the value of a currency by limiting investors and depositors’ ability to sell it in exchange for a foreign currency.

[11] Foreign investors would be discouraged from investing in Russia if they are not able to repatriate profits or if they fear that the state may pursue other measures harmful to their interests, such as expropriation and nationalization (i.e., taking investors’ assets).