Driving Growth to Catch Up 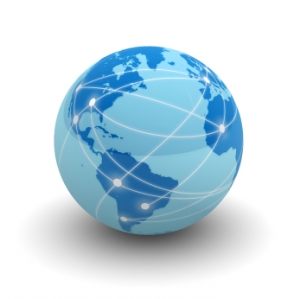 Yes, the rest of the world is rising.  Yes, advanced economies are still advanced.

Since the early 1990s, China’s share of total world income jumped from around 3 percent to around 12 percent to become the second largest economy in the world.  Despite the fact that all other emerging and developing (EMDEV) economies in the world combined are only twice as large as China alone (and increased their share of global GDP by roughly the same amount as China over the same twenty year period), China by itself still contributes about as much to global income growth as that whole group.

Though advanced economies have lost over 20 percent of their share in world income and are growing at about two percentage points lower than the non-China EMDEV group, they still contribute to world growth about as much as that same group over the last two years.  This shows how both the rest of the developing world as a group and the advanced economies are just as important as each other for global growth – a relatively new and key aspect of the 21st century global economy. 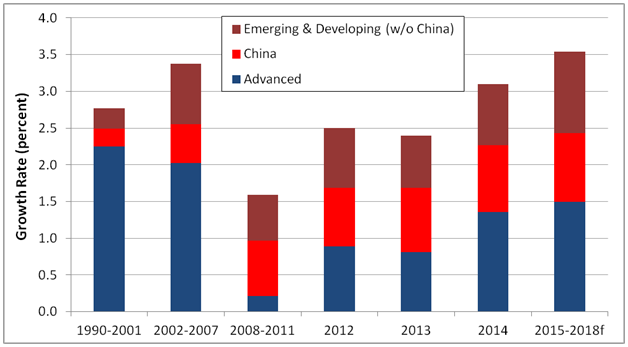 Aside from the importance of China and EMDEV to global growth, the chart above reveals two important characteristics about the world economy and its structure.  The first is that global growth is returning to the rates it had seen over the 1990s, and the second is that that growth is occurring more rapidly in EMDEV than in the advanced economies who had previously accounted for over 80 percent of total world growth over the 1990s.

The drivers of catch-up growth are dependent on an economy’s ability to absorb technologies through international trade and financial linkages, to translate productive investments into economic opportunities, to educate its population and most crucially to strengthen its institutions.  Kemal Derviş provides an excellent overview of convergence, interdependence, and divergence in the world economy.

Despite China being the second largest economy in the world, its population of over 1.3 billion people leaves its GDP per capita (income per person) of $9,800 (PPP) at 92nd in the world, behind countries like Brazil, Turkey and Mexico, who themselves still face a long road of economic, political, and social development.  Income per capita of about $41,520 (PPP) on average in the advanced economies is what these fast growing emerging markets and the Chinese are after.  So, although the shares of global income for advanced economies are decreasing (it is worthwhile to note that over the last twenty years, the United States’ share of world income has only declined by around 4 percentage points, while that of other advanced economies has shrunk by over 16), the global balance of wealth on a per capita basis is still highly skewed.

It is important to note, however, that although the rates of income inequality between countries are reversing and beginning to narrow, rates of income inequality within countries are increasing for both advanced and emerging market economies alike.  This is another phenomenon that deserves a lot of attention because its implications and consequences are far reaching.  Certainly a topic worthy of attention, as discussed by several leading policymakers and experts and as researched by the IMF.

Note: Countries included in “advanced” and “emerging and developing” groups are based on the IMF’s classification, shown here.  All data from IMF World Economic Outlook October 2013 and January 2014 Update, except for world population from U.S. Census Bureau.