U.S. Productivity May Shrink This Year

For the first time since 1982, productivity in the U.S. economy may decline. A new projection for 2016 by The Conference Board has output per hour worked, a measure of labor productivity, slow down by 0.2 percent. Labor productivity measures how efficient workers are in the production process. In the long run, an economy’s productivity is the most important determinant in improving standards of living and sustaining a healthy economy. 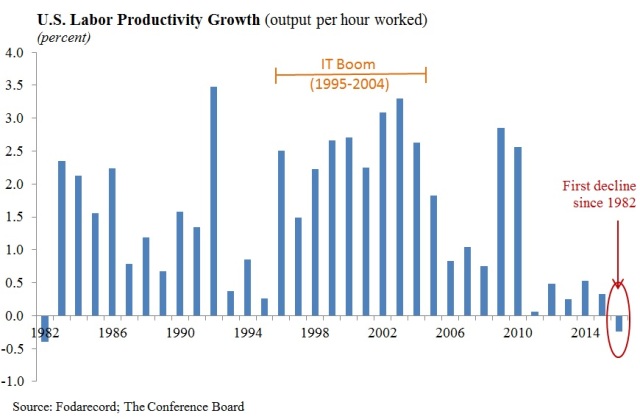 One of the biggest puzzles in the economy today is why productivity growth has been slowing down over the last decade or so, all while the pace of technological innovation has been as fast as ever. With more technology, each worker becomes more efficient. Although technology and knowledge have been progressing rapidly (the optimism in Silicon Valley seems unbounded), productivity growth has been slowing has since the effects of the IT boom began to fade in 2005 (with the exception 2009 and 2010 where productivity growth increased because the crisis had laid off so many workers, making the output per hours worked artificially higher).

← The G7 Is Still Relevant
OECD: Productivity Has Been Slowing for Decades →
Follow Karim Foda on WordPress.com