Tiger Index: A Shaky Recovery Runs Out of Steam

This article originally appears on the Financial Times website to accompany the Brookings-FT Tracking Indices for the Global Economic Recovery (TIGER). 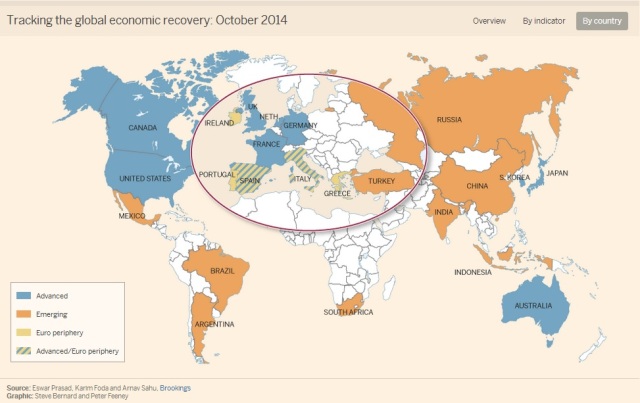 To view a full set of charts, visit the Financial Times or Brookings.

The global economic recovery has stalled and become unbalanced, with the U.S. now the sole major economy still showing signs of strength. Growth in China and many other major emerging markets seems to be losing momentum. The world economy is now being powered along essentially by one engine, with the U.S. business cycle at least temporarily delinking from the rest of the world.

The U.S. has experienced strong employment growth in 2014. The unemployment rate is down to 5.9 percent and employment has climbed above pre-crisis levels. But the labor force participation rate remains 3 percentage points lower than before the crisis and part-time employment remains high. Despite strengthening domestic demand, labor market slack has kept wage and inflationary pressures under wraps.

The euro zone has hit another rough patch, with the three largest economies (Germany, France, Italy) showing no signs of growth. Rising deflationary risks and declining business and consumer confidence have forced the ECB’s hand. While the monetary measures might reduce downside risks, they are likely to have limited traction in reviving growth unless other policies act in tandem to generate supply-side improvements. In Europe, the U.K. economy remains one relatively bright spot.

Japan’s economy is contracting. Growth has been dragged down by the tax increase associated with the deficit reduction plan and lack of credibility in the government’s commitment to labor market and other structural reforms. The Bank of Japan is fighting a mostly lonely battle to prevent the economy from contracting further.

China’s growth momentum has slowed. Given its commitment to financial sector and other market-oriented reforms, the government has refrained from resorting to its old playbook of investment-led growth fueled by broad-based credit expansion. Instead, a few targeted measures have been employed to selectively expand the availability of credit and direct it to more dynamic sectors of the economy. These measures have had limited success. The housing sector remains a drag on the economy. The government has enough policy space to engineer 7 percent growth this year and next, but this could be at the cost of raising medium-term risks to the financial sector and to growth.

India stands out as one emerging market economy with positive momentum, although coming off a rough period of declining growth. The new government, along with a reform-minded and credible central bank governor, appears to have inspired some confidence—or at least diminished the angst—among domestic and foreign investors. India’s growth prospects have improved in recent months but are likely to remain muted in the absence of broad-ranging structural reforms. Industrial production growth remains weak.

The Brazilian and Russian economies remain in a torpor, implying that overall emerging market growth is likely to remain weak for the remainder of this year. Concerns are also mounting that policy tightening by the Federal Reserve could trigger a pullback of capital flows from the more vulnerable emerging markets, especially those such as Brazil and Turkey that have large current account deficits.

Geopolitical uncertainties have contributed to the weakness in business and consumer confidence around the world. Adding to this are concerns that the major economies continue to rely on monetary policy to do the heavy lifting rather than undertaking much-needed structural reforms. The temporary policy space provided by aggressive monetary policy actions has not been used well by most major economies, which have squandered the opportunity to push forward with reforms.

The prospect of aggressive monetary easing by the central banks of major advanced economies and some emerging markets like China as they contend with weakening domestic demand raises the specter of further currency tensions. The U.S. appears willing—so far—to bear the brunt of the adjustment on the other side of the weakening currencies as its economy strengthens. Short-term cyclical considerations, the prospects of Fed tightening of policy interest rates, and continued safe haven inflows have all contributed to keeping the dollar strong.

The world economy is now being powered mostly by the U.S. growth engine, a situation that is untenable for a sustained and durable global economic recovery. To support more balanced growth, other economies will have to start pulling their weight, ideally by generating more domestic demand rather than relying on exports. A revival of growth cannot be engineered just by relying on central banks, a lesson that still seems beyond the grasp of political leaders.

Prasad is a professor at Cornell University, a senior fellow at the Brookings Institution, and author of “The Dollar Trap”. Foda is a research associate at Brookings. Sahu is a student at Cornell.

← Is China Serious About Liberalizing the Renminbi?
Inflation: Slowly Rising Prices Can Be a Bad Thing →
Follow Karim Foda on WordPress.com